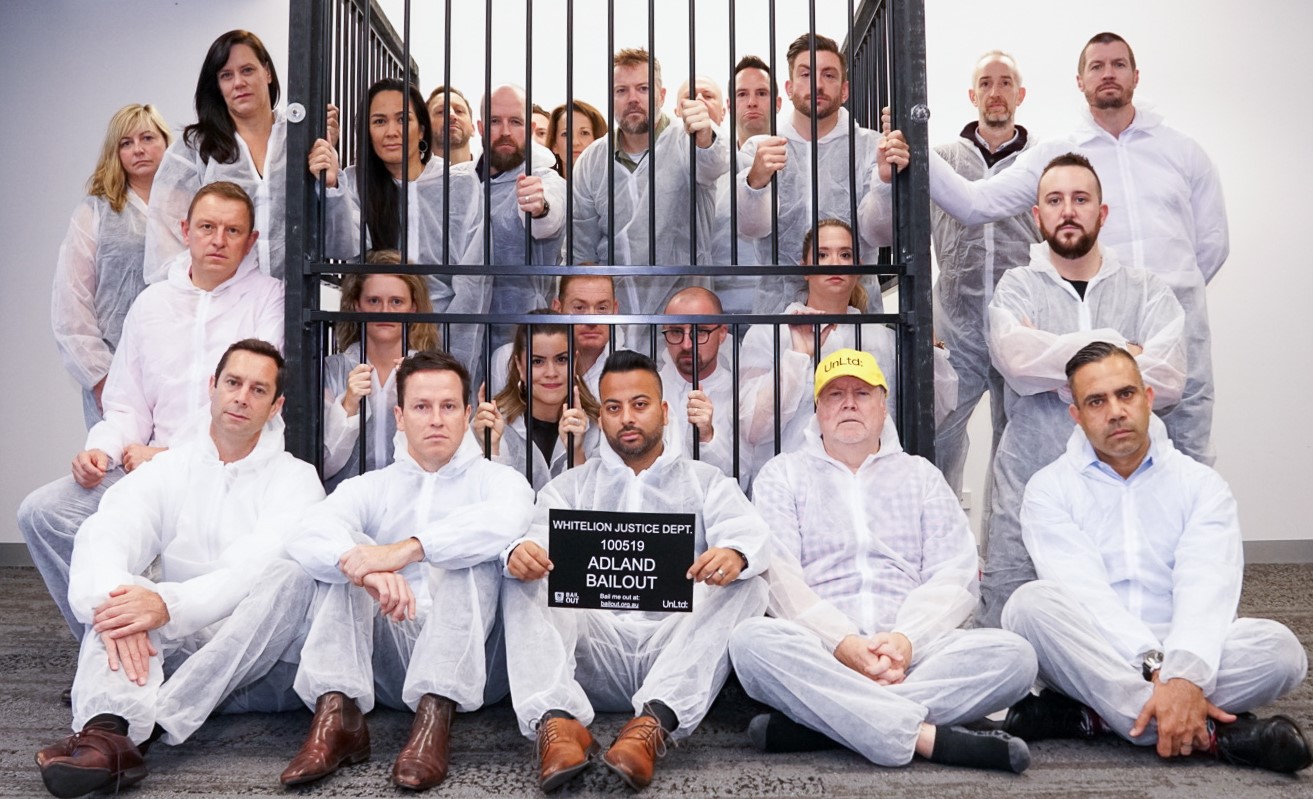 This May, 150 senior leaders from the media, marketing, tech and creative industry will spend a night in prison as part of UnLtd’s Adland Bail Out events in Sydney and Melbourne.

The ‘inmates’ will swap their usual evening wear for prison uniforms, solitary confinement and prison grub to experience what life really is like for many young people at risk. In order to be released the next day, each participant is required to raise $1,000 as their ‘bail’.

The event is organised by UnLtd and Whitelion and provides a unique opportunity to step outside the ‘media bubble’ and into the shoes of a young person that has been disconnected from the community due to abuse and neglect, drug addiction and poverty. The event exposes ‘inmates’ to the realities of life on the inside – they will be stripped of possessions (including those precious mobile phones!), fingerprinted, photographed and subjected to interrogation before spending the night in the cells.

Chris Freel, CEO of UnLtd commented: “This event is incredibly powerful because it takes most of us to a place that we have never been, where we get to understand and experience what life is like for kids who have been locked up. Often young people find themselves incarcerated because they have had nobody to guide them, nobody to believe in them and offer them hope and a positive life. So, we lock them up and basically set many of them on a path that they will never recover from. Whitelion and UnLtd firmly believe in rehabilitation. If we can’t rehabilitate children, then who can we help? The money and awareness raised from this event will ensure that there is hope for many young people and not a life behind bars.”

In 2018, the events in Sydney and Melbourne saw 80 leaders getting locked up raising over $160,000 for Whitelion, funding a critical outreach program assisting some of the most at-risk young people with locating stable housing, finding employment, engaging with education and accessing mental health support. This year, the target is to raise over $200,000 across Sydney and Melbourne.

Venessa Hunt, Digital Strategy & Investment Officer at Group M is one of the ‘repeat offenders’ returning to prison for the second time and commented: “In 2018 I joined the UnLtd team and other industry leaders to spend my first night in jail. It was one of the most impactful events I have ever been a part of. It highlighted to me one of the biggest challenges our society faces today.”

“Youth being at risk is not an isolated problem, it’s a problem that affects everyone and is everyone’s responsibility to address. This year I wanted to go back behind bars to show my support for this incredible event. With a young industry like ours it’s evident that great kids given the opportunity can do great things and literally change the world. By raising money and awareness through Bail Out, we’re helping Whitelion bring better opportunities to young people who need them.”

An awareness campaign for Whitelion, created by Ogilvy will also be launched at the event.

The first intake of 2019 inmates are:

To help your favourite industry personality reach their bail and be released from prison, please head to bailout.org.au.