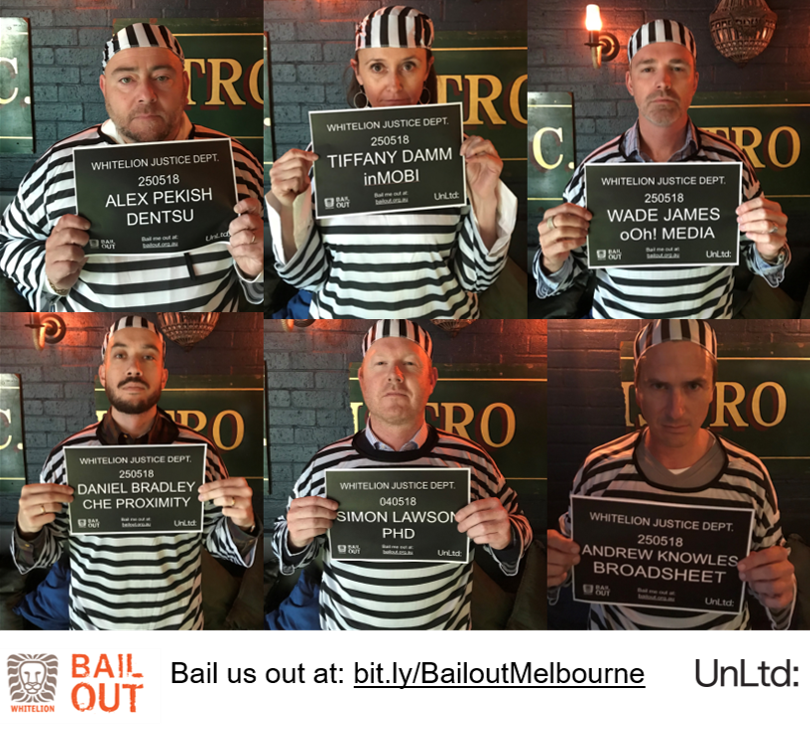 Seven well-known media and marketing leaders in Melbourne will be locked up behind bars on Friday 25 May to raise funds and awareness for Whitelion, an UnLtd charity partner.

Following on from the success of the Adland Bail Out in Sydney that saw 70 industry leaders spend the night in prison and raise over $140K to fund Whitelion’s outreach program, this time it’s Melbourne’s turn to experience what life in prison really is like for many young people.

Held in the Old Melbourne Gaol Watch House, the ‘inmates’ will be searched, fingerprinted and interrogated before handing over their mobile phones and putting on prison overalls. After some prison grub, the inmates will take part in thought-provoking workshops giving them insight into the issues that can lead to marginalised young people ending up in the juvenile justice system.

Wade James, Chair of the UnLtd Melbourne Board commented: “I’m not sure what’s more terrifying, that photo of Alex Pekish or the thought of sitting in a small cell with Simon Lawson - again! We’d love the Melbourne Media industry to support us in our quest to raise over $15,000 for such a great cause. We’ve currently got a long way to go to reach our target but it’s not too late. You can donate here: http://bit.ly/BailoutMelbourne”

CEO of UnLtd, Chris Freel, who only recently was bailed out of prison himself commented: “Having recently launched the UnLtd Melbourne Board, we couldn’t think a better way to initiate them than sending them to prison! This is just one of the first steps in galvanising the media, marketing and creative community in Victoria to drive social impact to help children and young people at risk. Having survived my night in jail, my advice to the inmates would be: don’t show up late, bring some tissues and keep your head down.”