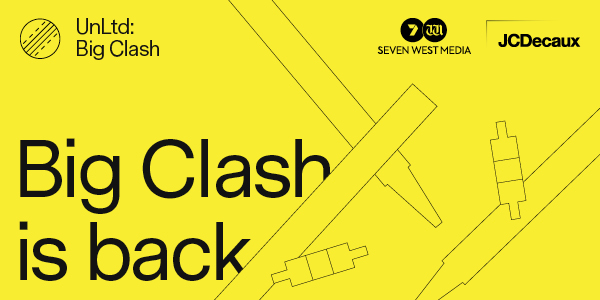 Big Clash, the most competitive game of industry cricket in the world, EVER, is returning in February for the ultimate sporting battle between Media Agencies, Creative, Media Owners and Tech. New to 2019, the event will also feature a ladies’ match – the Lady Ballers – which will see two all-female teams from Agencies and Media Owners go head to head.

Now in its fifth year, the annual event organised by UnLtd, the social purpose organisation for the media, marketing and creative industry, will see Adland dust off their cricket whites and team up with their usual competitors, all for a good cause. Last year, the event raised $125,000 to help children and young people at risk and to date has raised over $250k in funds.

Chris Freel and Oliver Newton co-founded the event five years ago and Freel commented: “Big Clash is now an annual fixture in the Adland diaries that unites the industry for a common cause. It’s not often you see Domain and REA in the same team and we love that our industry can put their competition aside for a day and focus on what really matters – bowling bouncers at your favourite rep or agency! Not only is it a great day out, we are also making a huge difference in raising awareness and much needed funds for the UnLtd charity partners helping children at risk.”

With Media Owners currently holding the trophy in Sydney and Media Agencies in Melbourne, 2019 will be an intense battle – will Creatives or Techies get the bragging rights this time around and who will lift the first ever ladies trophy?

Ben McCallum, General Manager of Mediacom Sydney and Team Captain for the Media Agencies Team is feeling confident: “I am honoured to be taking over the captaincy of the Media Agencies Big Clash side. When I was a young lad growing up in England I used to play cricket in the back alleys dreaming of this moment, and now it has arrived. Last year we were narrowly beaten by the Media Owners, however it has since been rumoured that both Sean Rigby and Chris Norris were seen leaving the ground that night with a large quantity of sandpaper. Let’s just say it was a hot day and the swing Newton was getting was questionable.We hope for a fair contest this year.

McCallum added: “I would like the thank Mark Jarrett for leading the side last year, a great captain indeed. To give you some context on how we will play this year, Mourinho has made way and Solksjaer has arrived, the agencies will ATTACK ATTACK ATTACK under my leadership. This trophy is heading home to where it belongs!”

Rosie Baker, GroupM Group Communications Director, one of the founders of the inaugural Ladies Match and previous umpire added: “At the beginning of Big Clash, when I stepped confidently onto the green to umpire, knowing all the rules of cricket and how to call a fair game, I was the only female on the cricket pitch. UnLtd has long wanted to involve more women in the day as players and last year a few women, including MKTG’s Erin Hunter, stepped up and led the way joining the men on the field. But this year, thanks to the efforts of a handful of dedicated industry women, including fearless Team Captain Kathryn Furnari, we’ll see a women’s game. And what a game it will be. The Aussie Women’s Cricket Team was the most successful national team last year – the Lady Ballers will be channeling that success. It’s an honour to step on to the pitch in 2019 as a player in the inaugural Lady Ballers game and help drive UnLtd’s fundraising efforts. What I lack in catching, bowling, batting and all-round cricketing ability, I hope to make up for in enthusiasm and entertainment value. If there are any women out there that want to join the Lady Baller ranks, and be part of the women’s match, step up and get in touch and join us at our weekly training sessions.”

The event will take place on 21 February in Sydney and 28 February in Melbourne and the industry is encouraged to join in on the day for music, food and drink and to help cheer their team to victory.

Team Captains have been confirmed as follows: