Industry gets behind youth at risk: Whitelion “Invest In Me” campaign launches 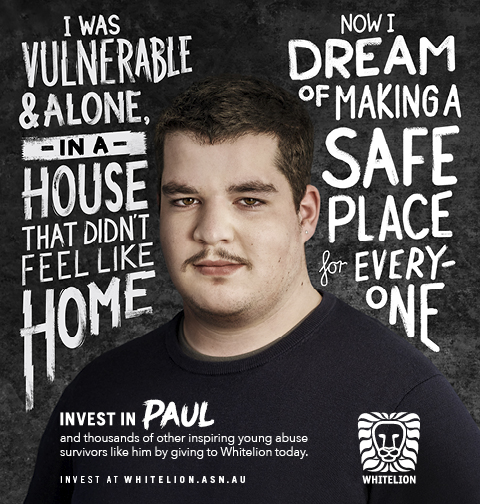 Over 35 companies in the media and creative industry have joined forces to launch the first ever awareness campaign for Whitelion, one of UnLtd’s charity partners.

The ‘Invest In Me’ campaign has been created pro-bono by Ogilvy to raise awareness and funds for Whitelion, and to change perceptions around young people at risk.

The campaign showcases the courage, resilience and strengths of the young people Whitelion supports. It tells their powerful stories that highlight their determination and ability overcome their past to create better futures on their terms. It’s these stories that mean a donation to Whitelion is much more than a one off, it’s an investment in the life of a young person.

Damien Pashby, Group Account Director at Ogilvy commented: “It’s staggering that there are approximately 36,000 young people in Australia who are currently homeless or sleeping rough. Young people who due to family circumstances and other issues usually outside of their own control, have ended up in a position where they need help. Before adulthood, these young people have often faced more challenges than most of us would in a lifetime and the daily determination that keeps them going is what we really wanted to focus on. They’re not homeless, they’re survivors.

Despite their situation, they have the ambition and drive to work to better their situations. This is a side of homelessness that hasn’t been focused on to date, and essentially is the point of impact for Whitelion – helping to provide support and guide the next steps in their lives to impact them for the better. The real young people who feature across the ‘Invest in Me’ campaign were a true inspiration to work with and the hope is that through this campaign, we can help Australians recognise the potential that exists inside each and every one of the youths that Whitelion work with.”

The campaign has received unprecedented support from across the industry with over $2.9m worth of media inventory donated through UnLtd.

Chris Freel, CEO of UnLtd commented: “Our role at UnLtd is to unlock the power of our industry to help children and young people at risk and this campaign is a perfect example of the good we can do when we work together. Thank you to the 35+ companies that have donated media space, Wavemaker for managing this, OGB for the PR, Kantar for measuring effectiveness, and Ogilvy for creating the campaign. This is collaboration at its finest and testament to a wonderful industry for rallying behind Whitelion.”

Rosie Walsh, Client Communications Manager at Wavemaker commented: “We are extremely grateful to have been given the opportunity to help bring this campaign to life. It’s a powerful reminder of the influence our industry holds and the positive change we can drive, when we all band together. The Wavemaker team have all absolutely loved working on such an incredible campaign alongside Whitelion, UnLtd, Ogilvy and all of our generous media partners.”

Hang Vo, CEO of Whitelion said: ““We are absolutely blown away by the incredible support we’ve received from the media, marketing and creative industry through UnLtd. This campaign is a unique opportunity for us to raise awareness of Whitelion and to help change the perception of the incredible young people we support. The circumstances these young people have had to face are often at no fault of their own. Our job is to help them move forward and build a better future for themselves – to choose a life they want, not what they’ve been given. We help build their skills and confidence to form positive social connection through mentoring and outreach which improves their chances of going back to school or getting a job.”