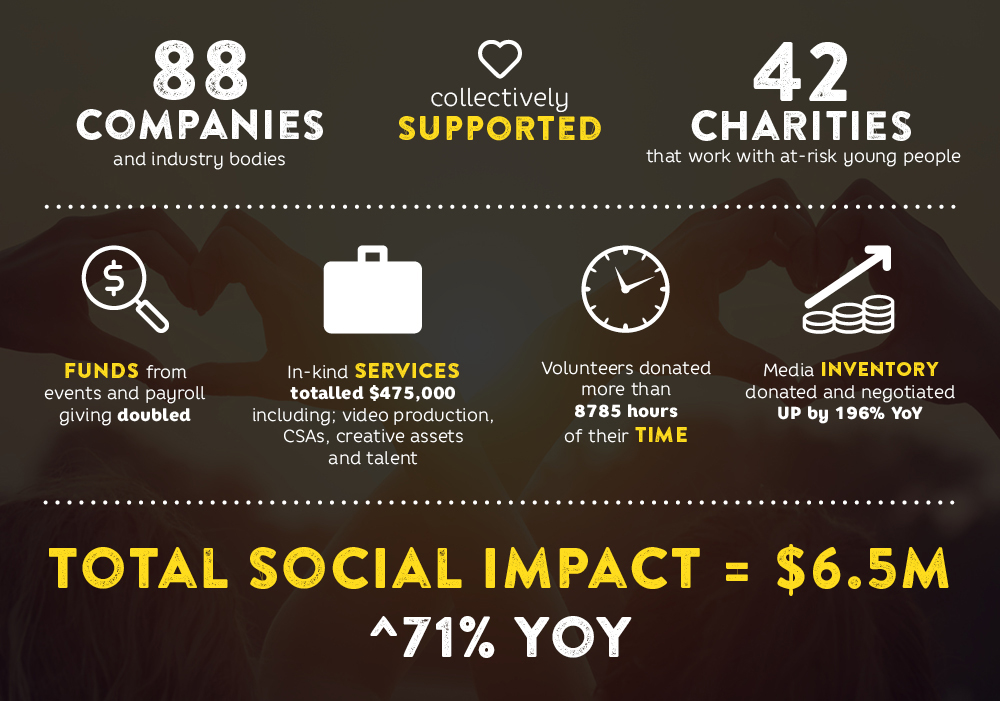 UnLtd has announced a record $6.5 million total industry contribution to social impact for FY16 as part of its annual results, released today.

Unprecedented growth in industry participation and social investment led to a 71% year-on-year increase in the total value of funds, services, inventory and time donated by the media and marketing sector.

“What our industry united to achieve over the past year, through UnLtd, is something to be incredibly proud of,” said Paul.

“UnLtd operates on behalf of our industry, for our industry and together, with our industry. Together, we’re creating social impact by delivering funds, services, media exposure and volunteered time to the youth not-for-profit sector,” he added.

- Volunteers donated more than 8785 hours of their time – from unskilled volunteering including working bees preparing food for homeless teens, to providing strategic advice on marketing briefs for charities (skilled volunteering)

- 500 more foster kids were matched with a ‘Pyjama Angel’ thanks to the support of Network Ten and Bauer Media Australia. The exposure and fundraising efforts by these media owners has seen; community volunteer registrations doubled, monthly donations tripled and this previously Queensland-based charity has gone national

- Another 2000 families suffering from the effects of childhood heart disease are now being supported with peer-to-peer or in hospital services. This is thanks to the added value secured by Initiative, who negotiated $750,000 of free media space for this charity’s annual fundraising campaign resulting in a 100% increase in donations year-on-year

“To those 88 companies and the countless individuals who have contributed in the past year, we say unlimited thanks. Thanks for believing in our industry’s unlimited potential to change young lives, and thanks for your role in helping us support Australian youth charities doing vital work,” said Paul.

UnLtd has raised in excess of $14 million in cash alone since its launch in 2008 and delivered over $24 million in valued resources to over sixty youth focused charities. In FY16 more than 120,000 young lives directly benefited through our industry’s support.